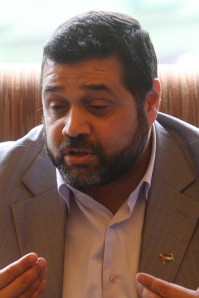 Perhaps, a servant in a restaurant near the lobby of the Sultan Hotel accidentally showed the list of alcohol drinks, include wine, to the leader of Hamas in Libanon, Usamah Hamdan. He insisted to refuse them. “I couldn’t drink this because I am a muslim,” said the thick beard man.

Then, the servant opened a new page of the menu booklet that consists of the list of juices. Hamdan who headed Hamas representative in Libanon since 1999 requested orange juice because the pineapple was not available.

Hamas has been well known as a group that imposed Islamic sharia strictly. During their four years domination in the Gaza Strip, they implemented some rules, like man and woman without family or marriage relationship can’t be together in the public, girl students obliged to wear Islamic dress code, and men are forbidden to wear over-knee pants at the beach.

It is the first time Hamdan visit Jakarta. He attended a two-day conference of the Asia-Pacific community for Palestine. Speaking to Faisal Assegaf who met him in that restaurant today, he highlighted the weakness of the United Nations because can’t pressure Israel to implement all the UN resolutions.

That comment should becomes insinuation and blow against 52 muslim majority countries that also member of the UN. “The weakness of the UN is not able to pressure Israel to implement all the resolutions,” Hamdan says. He also explained about the ongoing process of the reconciliation between Hamas and Fatah, negotiation on Gilad Shalit, and the future of Palestinians destiny. Excerpts:

The negotiation on the unity government was inhibited by the issue of the nomination of the prime minister. In you opinion, it can break down the reconciliation process?
When we signed the reconciliation agreement that was a strategic decision, no one thinks that the deal supposed to break down. What has happened in the last four years was thwarted because of the pressure from the United States and Israel mostly. Now, we still have faces their pressure.
I know when we talk about the unity after four years of division it’s not easy to go all the things at one moment. So, we have to do our best, solve all the problems. One of the important problems is the nomination of the prime minister. We prefer in Hamas to discuss the ability of the prime minister and then we can find a suitable name for this. If we do that, I think we will have dozens of names who can be prime minister, from independent or technocrat. In the last meeting, Hamas is not accepted the nomination of Salam Fayyad.
Though, the discussion on the other issues is still going on because the US is trying to undermine, at least to slow down the reconciliation while the Israeli try to break that unity process.
We have some good names, like Muhammad Mustafa (also nominated by Fatah), Jamal al-Khudari, Mustafa Barghuti, Mazin Sonoqrot, and Munib al-Mashri. We believe they are capable for the job and they believe in the Palestinian unity.

Abbas is trying to get the UN recognition on the state of Palestine. Do you think how important that recognition for the Palestinians?
I believe that we have more than enough of the international resolutions (around 100). The problem is not on those resolutions itself, but will of the international community to force Israeli to accept those resolutions. But Israel rejected them all. Even one of them was supported by the US and some important international players.
The weakness of the UN is not force Israel to do that. I doubt the plan will succeed because as far as we know there is kind of compromise between Abu Mazin and the Americans. If he drops the request, they may make a kind of arrangement to restart the negotiation.

Have you imagined that the international community will ignore the issue of Palestine because there is a world common problem, like the global climate change?
I convince that the problem is the Israeli occupation. If the international community is exhausted to address that issue, they must start to end the occupation. The problem is not on the Palestinian side, but from the Israeli. There will never be security and stability in the region as well as in the world if Israel doesn’t stop to occupy the Palestinians because Israel will continue to dictate the Arab and Islamic countries. Israel is the source of problem for part of the world.

Did Hamas principally accept the proposal from the US President Barack Hussein Obama about the two state solutions with pre-1967 border?
Until this time there was no that such proposal. I believe that all the efforts from Obama to restart the negotiation will fail. I also convince that all negotiations will not bring back the Palestinian rights. The Obama administration has lost their faith on Israel their own political system.

Is it confirmed that Israel accepted the proposal to release 1,000 Palestinian prisoners exchange for Gilad Shalit?
It happened three years ago and the rejected again. We want 450 until 1,000 prisoners to be released. Until now, Israel has not accepted that proposal. All women and children must also be released but Israel refused that too. So, there is no something new. We want the release of 1,000 prisoners, 450 by names and 550 by specifications. Also, all women and children must be freed. If the Israeli do that, Shalit can go free tomorrow. If not, Shalit will stay as prisoner of war.

Why did Hamas reject to give evidences that Shalit is still alive?
We must not give all the answers needed and asked by Israel because our prisoners are still suffering in the Israeli prisons. If they wanr more informations about Shalit, they have to consider our demands.

So, does Shalit still alive?
No one knows.