Hamas leadership in Damascus frequently has different views with the leaders in Gaza. 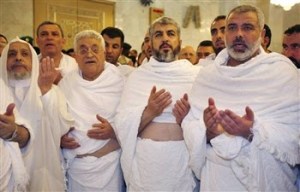 In a hasty move and red face, the commander of the Izzudin al-Qassam Brigade Ahmad al-Ja’bari and his men stormed into the office of Hamas leader in Gaza Ismail Haniyah. He spoke bluntly to Haniyah and insulted him.

He demanded a share of the funds that had been supplied to Hamas by former British MP George Galloway. Galloway has been well known as pro-Palestine activist. He has visited Gaza Strip in a convoy names Viva Palestina.

The former prime minister of Palestine obediently provided a case containing one million dollars to Ja’bari. The commander took US$ 600,000 and returned the rest to Haniyah. “We will use this money to manage our affairs for now, and don’t you forget that our share (shlud be) larger than yours. What you raised from the public is enough for you,” said Ja’bari. He also reminded Haniyah that he owed to Al-Qassam Brigade for the vehicles.

The incident was reported on January 20, 2010 by two Fatah-affiliated websites, alaahd.com and palvoice.com. The report said Haniyah’s deposed government doesn’t really control the Strip. All decisions made by Ja’bari.

It also illustrated that there were conflicts within Hamas. The disagreements also appeared between Hamas leadership in Gaza and Khalid Misya’al, the chief of Hamas’ political bureau in Damascus, Syria. Some reports said that the power struggles has existed for years, since Misya’al challenged Sheikh Ahmad Yassin’s leadership.

The disagreement emerged when Misya’al decided to end cease fire with Israel on the eve of Israeli aggression in December 2008. Mahmud Zahar and Ja’bari warned that decision was a hasty move because preparations for war against Israel had not yet been completed. But Damascus ignored the warnings.

The dispute also raised on the issue of Gilad Shalit, an Israeli soldier was captured by Hamas in June 2006. In March 2010, it was reported that Zahar had been force to withdraw from the negotiations after he agreed to concede on several of Hamas’ demands, while Ja’bari demanded the release of all prisoners on the submitted list.

It also reported that Zahar had made a mistake when he informed the prisoers’ families that their loved ones would soon be released, whereas Israel had announced its refusal to release about 100 of the 450 prisoners on the list.

Another mistake by the negotiators was that they agreed that some of the prisoners would be deported to Gaza or else expelled to another country. Based on those mistakes, Damascus had sent a letter to Zahar warning him not to involve in the negotiations. “You have nothing to do with the prisoner’s portfolio,” said Misya’al.

Fatah Central Committee member Muhammad Dahlan acknowledged about the existence of the difference views in Hamas on the issue of Shalit. “It is Khalid Misya’al who is sabotaging the Shalit deal, despite Zahar’s support for its completion,” he said.

The disagreement also appeared when the Al-Qassam Brigade produced an animated video suggesting that Shalit would end up like Ron Arad, an Israeli pilot was classified as missing in action since 1986. In the clip, Shalit’s father has a dream his son’s coffin wrapped in an Israeli flag.

Hamas spokesman Fauzi Barhum confirmed that the film was a mesaage to the Israeli public that their government is not interested in Shalit’s release. He said Hamas will not compromise on the conditions for his release.

But Zahar openly attack the Brigade’s video, stating that it did not reflect Hamas’ position. “Hamas will never murder captive Israeli soldiers. Our morality and our religion forbid it.”

The Palestinian Legislative Council member from Hamas Saleh Bardawil attempted to temper the dispute. “There is no contradiction between the content of the video and Dr Mahmud Zahar’s statements on the moral values of Hamas in all things,” he said.

According to Fatah Central Committee member Muhammad Shtaya, there was also the disagreement on the process of reconciliation in 2009. “Some of Hamas leaders are interested in reconciliation but its leadership in Damascus suspended to sigh the deal.”

“I am not saying that there is a struggle between ‘outside’ (Damascus) and ‘domestic’ (Gaza), but there are two different views,” said Nabil Shaath, member of the Fatah Central Committee.