Many new young couples have emerged during the Tent Revolution. 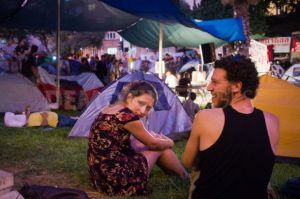 Among them, there was a young, nice and sexy girl, so-called Anav. All the boys attempted to close in her. They gave her popsicles, they gave her flowers.

“But she was interested only in me,” said a young businessman so-called Shamir. Over the past two weeks, he has abandoned the pubs he used to frequent to a tent on Rothschild Boulevard.

Anav and Shamir participated in a huge demonstration to protest soar prices, included housing price. They spoke for hours until three o’clock at night. Apparently Anah showed up without a tent. Then predictably, Shamir asked her to stay in his tent.

Also, what happen at the tent was predictable. They had making love. “It was hot and fun. Even, it was still crazy hot after it was done,” said Shamir.

He then opened the zipper of the tent to breathe a bit of air. It was surprised, there were 40 people standing around the tent and they applauded enthusiastically. “They had heard everything.”

Meital Azulay who was there with a friend relates that late one night. She saw a young cuple were making love in a silvery tent. That tent with the window open looked jumping and rocking. According to the dance teacher from Tel Aviv, that situation is legitimate when people have removed their bedroom to a tent on the street. “Just like at home,” said the 29-year old female.

A handsome fellow of 30, recognized that he used to have making love with his new girl in his tent. He met her while he went out to have a drink. They stopped in a kiosk and they bought salty snacks, some beer, and a three-pack of condoms, and straight into a tent.

But they realized it was not going to be all that simple because the lawn isn’t leveled, it’s full of stones, and bits of exposed concrete. “It’s very hard on the back, but you find the angles.”

As well as the demonstration continues, the price of condoms perhaps will rise because the emerging of many new couples at Rothschild Boulevard. Therefore, its soar price could be the target of the protest.